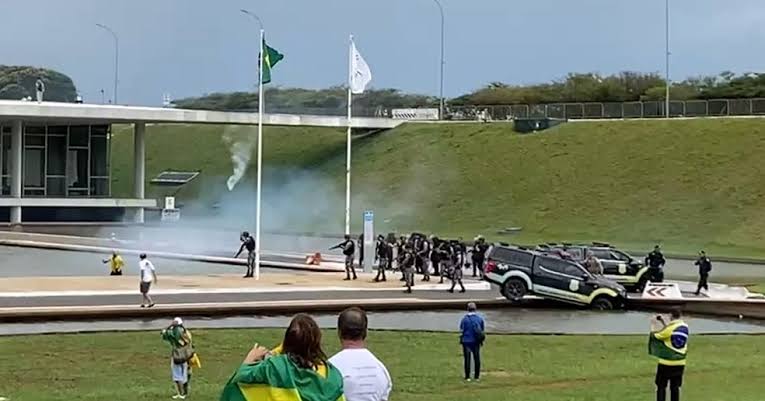 This Sunday (8), terrorists faced police blockades and invaded the National Congress, the Presidential Palace and the headquarters of the STF.

The terrorist act replicates the US Capitol episode that took place in January 2021, after the defeat of extreme right-wing leader Donald Trump in the elections.

The Brazilian terrorists first attacked the Congress building, confronting the police officers who maintained roadblocks in the area.

They went up the congressional ramp and then took over the famous domes. They also broke the glass window of the building’s Great Hall and managed to enter the National Congress.

After taking the Congress, a smaller group also went to the Presidential Palace, the seat of the federal government, and the Supreme Court (STF).

At the Presidential Palace, radical Bolsonarists reached as far as the fourth floor and depredated the seat of the executive branch.

At the Supreme Federal Court, the coup protesters broke glass in the facade and entered the building.

The lack of prevention by the Federal District military police was criticized by several authorities, who allege connivance and omission by Governor Ibaneis Rocha.

The DF (Federal District) government knew of the arrival of a hundred buses in Brasília this weekend, with more than 4,000 radical Bolsonarists arriving in the capital, and the manpower assembled by the DF governor was below the necessary.

Given the inability of the Federal District (DF – Distrito Federal) government to contain the terrorist acts, members of the federal government, congress and ministers of the STF are advocating a Federal intervention in the security of the DF to stop the invasion and restore order in the area.

President Luiz Inácio Lula da Silva decreed Federal intervention in the security of the Federal District until the end of January.

The intervenor will be Ricardo Garcia, executive secretary of the Ministry of Justice.

“The objective of the intervention is to put an end to the serious compromise of public order in the Federal District, marked by acts of violence and invasion of public buildings,” says the decree read by Lula.

Lula held a press conference to discuss the decree in Araraquara, in the countryside of Sao Paulo, where he traveled early in the morning to see the effects of heavy rains in the city.

Lula also said that the terrorists involved in the attack against the democracy this Sunday should have “exemplary punishment.”

“If there was omission by anyone in the federal government that facilitated this, they will also be punished“, the president continued.

What does the O Jornal Analítico think?

The way the authorities confronted the coup plotters, who since the elections have been in front of Brazilian Army bases, closing highways and attacking democracy, has an air of connivance and a certain disdain.

Such connivance has given the terrorists the impression that anything is possible, given the lack of action by the authorities. The basis of the coup plotters is so surreal that makes us treat them as unimputable, which they are far from being.

First it was necessary to attack the professional press and democratic institutions, discrediting them in the eyes of the Bolsonaro supporters, who are prone to believe the lies.

After setting up the lie as a parallel truth and creating fake news constantly encouraging the coup plotters during these post-election months, it was only a matter of time that through financing by Bolsonarist businessmen and the silence of the former president before the facts, the terrorists would go into action, repeating the domestic terrorism that resulted in the invasion of the US Capitol.

It is urgent the need to put an end to the coup acts that have guided the military intervention, closing the Congress and the Supreme Court.